Too Big for My Britches: A Memoir 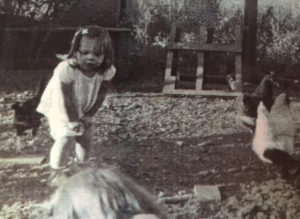 Growing up in the 50’s in what was then a small town of Napa, California was exemplary, as the third daughter with a younger brother, a full time mother and a hard working father. Dad could fix anything, lay cement for a patio, paint the house, and hunt and fish for food for the family, among other things. He also taught us how to play sports, baseball, basketball, and football. Mom was a reader, and a member of the Book of the Month club. She read to us, and took us to the library every week. Mom made our clothes and knitted our sweaters and Dad’s socks, prepared our hot meals and kept the house clean. She was home when we walked in the door from school. She also deposited Dad’s weekly paycheck and paid the bills. Motherhood was socially valued in the ‘50s.

With a backyard the size of a football field, a swing, a vegetable garden, chickens who produced fresh eggs, a big wooden picnic table for summer barbeques of venison steaks, or homemade sausage, and a cocker spaniel named Patty who had puppies, and a cat named Stinky, what more could a kid want. I was a happy child.

This was my growing up until I was in high school.

Then I started to reach for more than what was assumed for a young woman from a working class family and first generation Swiss Italian daughter living in a small town. I aspired to go to the university and live in the city. I wanted a university education and a career in the larger world beyond my hometown.

Why wasn’t a junior college education good enough, which is what my parents presumed for me? Was I assuming to desire a larger world and a career beyond that of my background and age? Was I being too confident perhaps having too high an opinion of myself? Was I conceited, too cocky? That is how I felt I was considered too big for my britches.

Too Big for My Britches: A Memoir is a story of creating my life while confronting assumptions about women in work, marriage, and motherhood.

My book has been written in part in writers’ residencies, writers’ workshops, drinking decaf Americano in cafés in New York City, and Berkeley, and in my home study with the door locked. I have been writing my memoir beginning in 1995, at Hedgebrook, in Langley, Washington, when I read a draft of a chapter entitled, “Meria, May You Rest in Peace.” It was eventually published under the same title in 2005. The same year, I wrote “My Lost Uterus” during my last day of 3 weeks at Ragdale Writers’ Residency, at Lake Forrest, Illinois. This essay was published in 2007 under a title chosen by the editors of Newsweek, as “A Surprising Grief.”

Too Big for My Britches is my story of confrontations with presumptions of women’s place in the 1950’s through the mid 2000’s, helped along by the evolving social movements for equality.